You will have to, since I couldn’t get the GIFs.

Tell you about my latest release, Protected by the Knight! 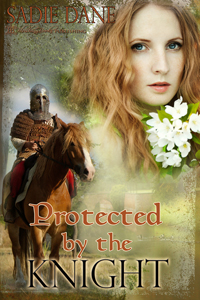 #3 in Loving the Knight

Sir Edward Caldwell is not the type of knight to entertain notions of love. He has seen how little it takes to break a vow, and refuses to ever end up the fool. So when he’s ordered to protect a visiting princess, he seizes the opportunity to add a royal notch to his bedpost. What he never expected was that the princess would be just as much of a player as he is.

Princess Lotte has mere weeks before her arranged marriage is to take place and, despite her personal guard’s wishes, plans to spend that time experiencing everything life has to offer. Luckily, fate sends her just the knight for the job. But when she finds herself over his knee, with her heart on her sleeve, she realizes she’s playing a dangerous game – without knowing the rules.

Need to know what you’re getting into? Here is a blurb!

“Of course, dove. You are my everything. Without you there is no meaning.” Edward performed his lines with the perfection of a seasoned actor. He gripped the supple cheeks of the vixen straddling him. She bit her lower lip, an amazing actress by her own right, as her bright blue eyes burned. They both knew the parts they needed to play.

“What if my husband finds out?” she whispered as if their love had robbed her of enough air to speak at a normal level.

Edward let his hands slide up her torso where he held a breast in each palm. His cock hardened at the dessert that was to come. He’d sampled this treat before and knew it was worth the theatricality required to taste it. “Let him find out,” Edward hissed, his lips vibrated against her neck. “Let the world find out!”

She wailed in longing, their scene had reached its climax and now it was time for Edward to reach his. His cock celebrated its near victory. His hands joined the party as he lifted the sultry siren up enough to delve into her silky folds.

Someone knocked urgently at his door. Edward turned his head from the sound and lifted his hips. The woman froze, wide eyes transfixed on the very door Edward was happy to ignore.

The woman shrieked. “What if it’s my husband?”

Moments from glory, Edward clucked his tongue and shook his head softly. “No, no,” he placed a soothing hand on her cheek. “I’m sure it is nothing import—”

“Urgent message from the King!” came the voice from the other side of the door.

“Jesus, Mary, and Joseph,” Edward bit the words out, sliding from beneath the beautiful, blonde filly. He watched her slide back and out of sight before yanking the door open, not bothering to cover himself. “What is it?”

A young, very serious looking messenger glanced once at the parchment he held before speaking at a volume loud enough for the entire castle to hear. “The King requests your discreet presence at a secret—”

“Excuse me,” Edward interrupted the messenger, leaning one arm up and against the doorway, “if it is a secret, should you be screaming?”

The messenger remained, his mouth wide open, his forehead crinkling as if he was pondering life’s greatest questions. Edward looked past the goldfish and spied a smirking figure lurking in the shadows on the other side of the path.

“I am quite busy,” Edward said to the figure in the shadows.

Caldwell leaned forward and crossed his arms. “Not anymore.”

For the rest of the free sample, or a chance to buy please visit:

3 comments on “Release Day! Or, the post when I tried to for an hour to use GIFS”

Get in my face

Get in my face